Growing up, Blake was an athlete. He would spend his days playing baseball surrounded by loving parents and good friends. He was accepted into the University of Miami on a baseball scholarship where he played as a catcher. However, after dislocating his left hip, Blake’s baseball career came to an end, and a 16-year battle to regain his life began. 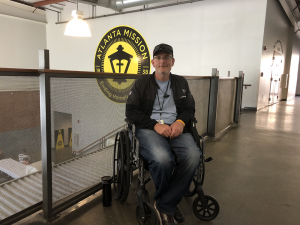 After popping it back into place, his doctors sent him on his way. What they didn’t notice, was that his blood flow had been severed. For over a decade, Blake struggled through Avascular necrosis, a disease causing bone tissue to die due to lack of blood flow. Because of this injury, Blake was unable to continue working, lost his insurance that would’ve paid for a hip replacement, and eventually had to apply for disability.

Blake’s battle for disability was long and grueling, bringing him lots of heartache and hardships along the way. Because of his inability to work and a few other underlying factors, Blake and his wife divorced. After exhausting his savings and losing his apartment, Blake was left with no one to turn to and nowhere to go – until he found Atlanta Mission.

In April of 2018, Blake came to Atlanta Mission depressed, hurt, and longing for a new beginning. Through counseling programs, small groups, and lots of support, Blake has found a relationship with God that has allowed him to grow spiritually and emotionally. “I learn something every day, but one of the biggest things I’ve learned is patience.”

“I’m starting to feel like me again. It’s been quite a while since I’ve felt like that.”

Today, Blake is living at Fuqua Hall (our transitional housing program for men) where he is awaiting double hip surgery. While the road to recovery hasn’t always been easy, he likes to look at each day as a new opportunity to work toward a new life. “My goal is to get my hips fixed, go back to work, and go back into some form of athletics, maybe coaching.”