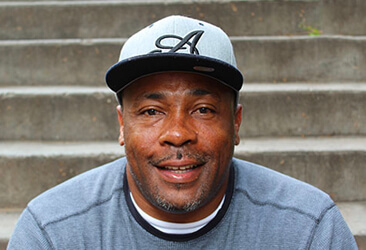 “I had it all, but I lost it all.” That’s how Harry summarizes the disastrous events that brought him to Atlanta Mission. He had everything a man could want — family, home, career and more. But when his wife of more than 20 years left him, it all came crashing down.

Harry was overwhelmed with sadness and “completely lost.” To ease that pain, he used cocaine heavily — only to lose the last thing that was keeping him going, his job. He stayed in motels until his money ran out. Then he was homeless.

“My best friend invited me over to celebrate, but I was so brokenhearted and lost in addiction that I missed it. I was destroying myself,” he remembers. Indeed, Harry was so low that he went four days straight without eating.

Desperately hungry, Harry realized he would have to dig through trash to eat — something he had never had to do before. The thought was so upsetting, so disturbing, that it finally convinced him to come to Atlanta Mission for help. “I came here with just the clothes on my back,” he says. “It was a day or two after Thanksgiving. When I got here, I couldn’t believe  how nice this place was. Everyone was so welcoming. And I was so relieved to have food, I was trying to eat everything and then some.”

Those meals sparked a healing journey that continues to this day. Now, not only is Harry clean, but he’s also living responsibly and recently began a new job. His relationship with his children has strengthened and he’s growing in faith.

Looking back, Harry says, “When my wife left, I should have followed God. Instead, I listened to my flesh. My teachers here taught me about spiritual warfare, and my counselors taught me about healing. I see now how I need God in everything.”

When he thinks about the pain he was in last Thanksgiving and where he is today, the contrast is stunning — and Harry is filled with gratitude. “Atlanta Mission has been a big blessing,” he says. “The people who support this place gave me another chance.”

To read other amazing stories of transformation, click here!