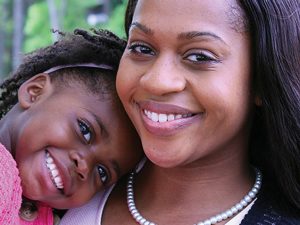 Because of your generosity and compassion, Heidi and her daughter were given a chance to start anew.

Heidi doesn’t look homeless. She’s all things bright and beautiful, and if you met her, you’d think, This young lady could do anything.

But it’s also true that anything could happen to this young lady . . . or to any one of us. Including losing our job and our home, and having no place to turn.

Heidi once had it all. She was a high school basketball star and was a dean’s list student in college. She received a scholarship to study in London. And she was a rising star with the FDIC.

Even when Heidi learned, right after college graduation, that she was pregnant, she still had a promising future. Her boyfriend didn’t stick around and others urged her to get an abortion. But Heidi believed her baby was a gift from God, and she was determined to make it.

“I started crying,” she says, “What did I do wrong? How did I end up like this?”

She tried a couple of area shelters, but never felt safe. Then she heard about My Sister’s House — Atlanta Mission’s facility for women and children. By God’s grace, they had one bunk bed that was open.

“I’ll never forget our first night at Atlanta Mission,” Heidi says. “I finally felt at peace. It was a place for us to be safe at night, where I wouldn’t have to worry about how we will eat or sleep. It felt like family.”

Heidi prayed every night for God’s protection and provision. Soon, a prominent insurance company offered her a good job, and soon she and her baby girl moved to their own apartment.

Heidi says it was hard to leave Atlanta Mission. She could’ve stayed a little longer, “but I wanted to give back, and staying there would’ve denied someone else a bed. So I gave up my spot to the next person.” That was two years ago. Today, life is looking up for this young mother and her child: “It’s like the storms have cleared and the sun is finally shining again.

“I’m so thankful that Atlanta Mission was there, because I don’t know what would’ve happened to us. Those thoughts scare me. So I’m very, very happy the shelter was there for us. And now my prayer is that I’ll never have to experience homelessness again.”

Your kindness and generosity results in stories like this. The lives of men, women, and children are being transformed every day at Atlanta Mission.

Thank you for your continued support!