Growing up, Ali never felt like his mother loved him. As a single mom, her attention and care were fixed on her other three children and Ali was left to fend for himself. He began to hang out with the neighborhood kids in order to have a sense of community. At the young age of thirteen, Ali began drinking alcohol. “Part of me wanted attention,” Ali says. “But I also think I was trying to deal with the pain of rejection I felt from my mother.” 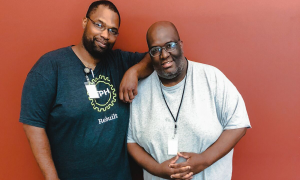 As he grew older, Ali began to rely on alcohol to get him through tough situations. He dropped out of high school and worked in physical labor for years.

He moved from house to house to stay with different family members and friends. When he was 38, he went to see his estranged father in Philadelphia and learned that his father was in the final stages of cancer. While there, he met his half-brother, Darryl, and they began to form a relationship. Tragically, his father passed away on Christmas Day while Ali was with him.

This was the breaking point for Ali. He drank to deal with the pain. His whole world revolved around alcohol. He and Darryl were both addicts, using alcohol and drugs to numb the pain of loss. When he was at his lowest point, Ali decided to seek help. He had heard of The Potter’s House and he and Darryl made the decision to go get clean and rebuild their lives together.

Ali has now been here for eleven months. He is in our Make Progress Services and his life has changed drastically. He has built close, trusting relationships with staff, volunteers, and other clients. He has taken classes on emotional health, relapse prevention, and other life skills. His counseling sessions have helped him face the trauma he has endured and begin to process it. Above all, Ali has found hope at The Potter’s House.

“When you are so broken, no matter how much you try to fix yourself, you can’t,” says Ali. “You have to humble yourself and learn new tools for a better life. The Potter’s House gives you those tools. God is truly at work here.”

Ali plans on continuing for another year at The Potter’s House, working on his recovery and training to become a minister. He also wants to obtain his GED and eventually go to college for wireless network technology. He has found a church home and plans to stay in the Athens area in the community that The Potter’s House has helped him build.