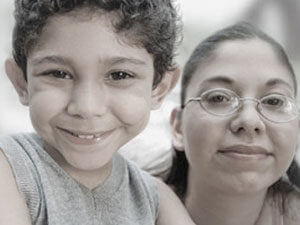 As a child, Laura didn’t have much of a father figure, because her dad was rarely around.

Though she longed for her father, the pain was too much to handle. “I grew up with resentment and insecurity around men.”

But as often happens in these situations, Laura ended up dating men who reminded her of her father. And she got burned. She has two children — both boys — by two different men, neither of whom stuck around.

Her family ended up bouncing from home to home, and often ended up in squalid living conditions. One location was particularly deplorable, and when Laura spotted a rat one day last summer, she’d had enough.

They turned to My Sister’s House (MSH), Atlanta Mission’s facility for women and children, and found more love and support than they could’ve ever imagined.

“It’s been the best thing that’s ever happened to our family,” says Laura. “They take such good care of us. The program here is like doing surgery on your heart. You open it up, poke around, see what’s going on. After you take all the junk out, you stitch it back together. It’s not brand new and shiny again, but it is restored.”

And it’s all done with dignity and respect.

It’s called “My Sister’s House” for a reason. When peers ask MSH kids where they live, they don’t have to say “a homeless shelter.” They just say, “At my sister’s house.”

School buses pick them up first and drop them off last, so other children don’t have to see where they live. And MSH kids are given school uniforms to help them fit in.

“A lot of these kids are concerned about how they’re perceived by their peers,” says Jeremy Stephens, a behavior specialist at MSH. “We want them to find their identity and value not in their financial situation or where they live, but in who God says they are.”

It seems to be working. Laura’s older son, who has some learning difficulties, used to think he was stupid. Not anymore. Now he’s more confident in himself, and he’s a proud reader, carrying a book everywhere he goes.

His mom has also found new identity in Christ. “I used to look for a father figure in men,” she says. “I didn’t realize it, but I was looking for the love of the Father, who never left me or abandoned me. And now I’ve found Him.”

As for Laura’s son, he has just one word for living at My Sister’s House: “Awesome!”

Stories like this are a direct result of your kindness and generosity. The lives of men, women, and children are being transformed every day at Atlanta Mission. Thank you for your continued support!